Bonnie A. Berns, a native New Yorker, graduated from New York University, where she achieved the honor of Phi Beta Kappa and received the Founder’s Day Award for high scholastic achievement. Ms. Berns graduated from Antioch School of Law in Washington, D.C. While in D.C., Ms. Berns was a consumer advocate and worked on legislation to benefit consumers.

Early in her career, Ms. Berns started her own practice in Naples, Italy where she represented individuals at special court martials on the U.S. Navy military base.

Then Ms. Berns moved to Florida, and in 1985 opened her own private practice in Palm Coast, Florida. Ms. Berns represented people who were injured in accidents, employees who had problems with their employers, and persons with family law problems. She also did wills, estate planning, and probate.

In 1996, she moved her practice to the Tampa Bay area where she practiced as a civil trial lawyer for ten years in both Federal and State Courts. In December, 2006, Ms. Berns relocated back to the greater Daytona Beach area to serve Volusia, Flagler, St. John’s and Duval Counties. Ms. Berns continues to serve the Tampa Bay area as well. 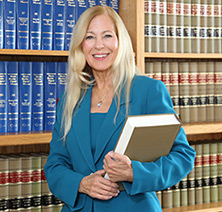